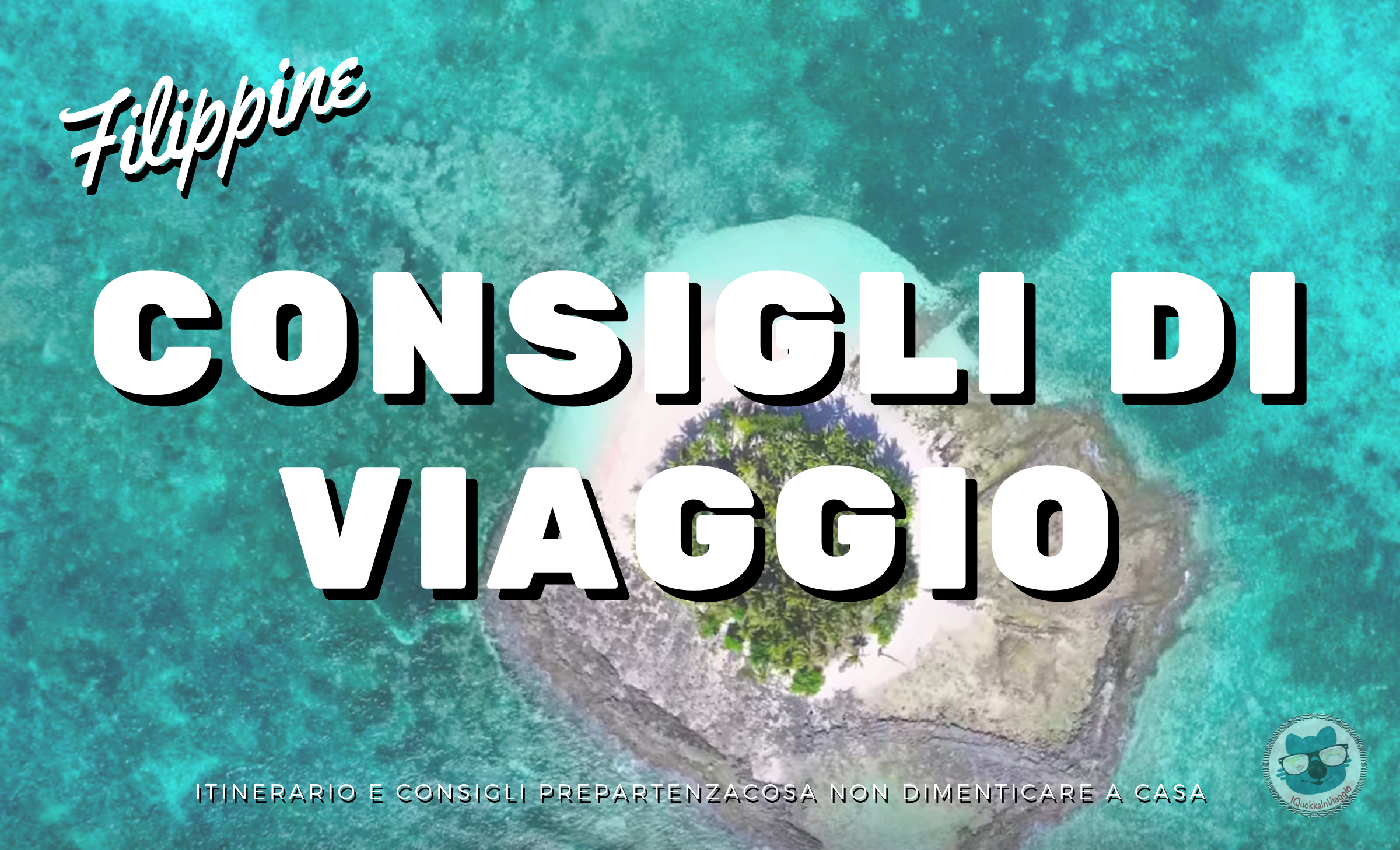 Travel to the Philippines – Advice

Usually we write articles when we return from travel, and we commit ourselves to write all the useful tips based on our travel experiences.
This time we decided to write this article before leaving, because Organizing the trip to the Philippines was more challenging than others. So we think we have already learned something useful for everyone.

It is not yet a very popular destination, especially for us Italians, but is becoming increasingly popular month after month.

Fly to the Philippines

To arrive in the Philippines from Italy there are many carriers that leave from the main Italian airports and arrive directly in Manila. If you do not intend to visit Manila (we have temporarily discarded it) you can choose the route Milan – Hong Kong – Cebu managed by Cathay Pacific.

Where to go in the Philippines

Here the problems begin. The Philippines is an archipelago of more than 7,000 islands.

A lifetime would not be enough to visit them all, just imagine when you only have a couple of weeks.
The most “famous” destinations are definitely Manila, Cebu, Oslob, Dumaguete, Bohol, Siquijor, Siargao, Boracay, Palawan and Luzon . But let’s see in detail these destinations and which ones to choose:

Let’s be clear: we didn’t find any positive reviews for this city. A metropolis of south-east Asia, almost entirely deprived of the Asian soul due to a strong Spanish colonization. For this reason, many itineraries, including those of our fellow travel bloggers, do not consider Manila as a milestone. It is inserted, at most, as a “buffer” for international / domestic flight connections. And so we did, when we return between the flight from Coron and the flight home, we will have a night in Manila.

Cebu, unlike Manila, is increasingly becoming a tourist destination. It guarantees the direct arrival of international flights and immediately allows you to immerse yourself in the most spectacular activities in the Philippines (Kawasan Falls, Oslob and whale sharks). In addition, numerous ferries depart from the port of Cebu to other tourist beach resorts.

Oslob is among the most photographed and filmed destinations in the Philippines. The reason is easy: in this area it is possible to swim with whale sharks. An excursion that, if you have time, we advise you to do because you will remember for a lifetime.

Dumaguete is another excellent starting point, wich deserves to be seen for a few days. From here you can start doing some excursions and take the ferries to reach Bohol, Panglao and Siquijor. Mandatory excursion if you decide to stay in Dumaguete is the Apo Island: you will have the opportunity to swim with sea turtles.

Bohol is definitely a great destination for a trip to the Philippines (we decided to stay 4 nights). What convinced us to choose Bohol among the stops on our journey were the Chocolate Hills and the island of Panglao. The Chocolate Hills are a very particular and unique geological conformation in the world: thousands of rounded hills that become chocolate-colored in the dry season. Panglao is an island linked to Bohol by two bridges accessible by car, so it looks like a peninsula of the largest Bohol, it is famous for the fantastic beaches and the Tarsier reserves .

Unfortunately we had to give up spending a few days on the island of Siquijor. Having chosen Panglao as the base (in this area of the Philippines) it is not easy to go to Siquijor without spending at least 2 days. Among the many attractions of the island the most famous are Saladoong Beach and the magic tree of Balete.

We discovered this little gem of the Philippines too late, we had already booked the whole trip. We would probably have kept it in any case for a second trip to the Philippines, but we advise you to keep it in any case. Excellent for those who love surfing, Siargao is still little known by mass tourism and still contains the soul of the authentic Philippines.

Boracay has been named one of the most beautiful islands in the world . It has been taken almost by assault by tourists in recent years, so much so that a temporary closure by the Philippine authorities is necessary. After the closing period it has finally reopened, with strict rules on the maximum number of entries, to preserve the island’s ecosystem. We have discarded it for fear that it was still too touristy and crowded since we will go to early May which is still high season.

This province of the Philippines is the one to which we will dedicate most of our journey. El Nido, Coron, Port Barton, Puerto Princesa are just some of the most spectacular areas of this province. We had to make a selection and we will go to El Nido and Coron, if you have more time than us we would certainly recommend giving Port Barton a chance.

What to bring to the Philippines

There are some things you absolutely can’t forget to pack. While we are writing these lines, we also check that we have packed them!

Useful to be able to walk on uneven waters while snorkeling and to go up and down from the boat to the jetty. We bought sea / rock climbing shoes also for the Seychelles without using them once. We will tell you if they are really necessary

In the Philippines there are plenty of places to do Snorkeling and an underwater camera is essential for filming the underwater world. We have a Nikon Coolpix that is perfect, but if you don’t want to have specific equipment you can fold up a very useful underwater cover for your iPhone..

A valid alternative to an underwater camera is an action cam. We can not advise you a GoPro Hero latest model, but even the cheapest competitors can go well. In the Philippines you will have a thousand occasions where it will be useful and you will be able to capture exciting and hilarious videos.

Giugi has bent over backwards to be able to give it to me in time to do the tests and take it to the Philippines! Finally we have a DJI Mavic Air to film the hidden lagoons and bays from above. We know it’s not an accessory for everyone, but for a trip to the Philippines it’s a purchase we recommend you make.

In the Philippines we have read that ATMs are taken by assault and, above all on the islands, it often happens that they remain without cash availability . We advise you to bring a fair amount of cash to survive and not risk having to give up an excursion or a dinner out. We will check this aspect very carefully, because running with lots of cash is never nice, it never gives much security.

NEVER underestimate the South-East Asian sun! We have already made this mistake in Thailand: first day at the sea of the PhiPhi Islands, sky covered by clouds, but we burned the same.
In Italy, let’s be honest, we never use sunscreen, but for go to the tropics better bring at least a protection 30 UVA / UVB.

Many have told us to bring an anti mosquito repellent for the Philippines, even during excursions. Nico suffers a lot from mosquitoes and therefore we will surely wear it, but we will tell you if the situation is really as tragic as they have drawn it or if it is a livable thing.

We never carry it. The only time we decided to buy the full face masks and taking them on the road was a flop. Usually, therefore, we rent them directly on the spot and also for the trip to the Philippines we have decided to do so. They also reassured us that during the organized excursions they are provided. If you have your own equipment and are used to carrying it, you cannot absolutely forget it at home!

Follow us on our social media channels during our trip to the Philippines!

Don’t miss the daily updates with Instagram Stories and stay tuned to the blog for articles with our experience!

Travel to the Hawaii – Advice